Warren Davis believes a Ansarada Room is the best tool in a competitive bid scenario. Get a lawyer's perspective on virtual data rooms for competitive bids.

Warren Davis, partner at Kardos Scanlan in Sydney, has been using ansarada data rooms for a decade. He explains why it’s “the best tool in a competitive bid scenario.”

“One of the best things about the ansarada tool is you get to choose who sees a particular document, and then you can actually see when they’ve seen it, for how long, and who it is, which is great.

When we’ve got a competitive bid process, there’s a bit of subjective opinion and you can see who’s actually making an effort in an ansarada data room. You can spot a tyre-kicker straight away because they’ll go and have a look at a document and then they won’t do too much more.

They’ll do some token due diligence but they’re not really poking sticks all over the place. So you just know you really don’t want to deal with those people.

You’d never know that if you didn’t have an ansarada tool.

And if they throw a massive team of people in there going hard at it, you can see that through the reports, which is great.

It’s probably the best tool in a competitive bid scenario, for that reason, particularly when you’re dealing with competitors who can ruin you tomorrow.”

Warren makes use of ansarada’s secure by default features – which prevent accidental disclosure – when building a Black Box component into a deal. The information secured in the Black Box remains secure until very late in the deal process, sometimes until after contracts are exchanged, thereby maintaining business confidentiality.

“You have to do it in industries where if you revealed everything about your business, you’d be gone tomorrow.

In most industries, it’s probably okay to leave the Black Box until the very end, and then reveal it before exchange. But in some industries it’s just an absolute no-no … and there can be a condition precedent that says there is going to be certain information they’re not going to see until they’ve exchanged contracts. You don’t want to be giving them the crown jewels.

Then there’s a mechanism in the sale agreement that allows them to walk away if there’s a terrible thing in that information.”

Warren first came across the ansarada data room whilst working as a corporate lawyer acting for blue chips in the defence, transport and insurance sectors at Bond Dickinson, formerly Bond Pearce, in Southampton. He continued to use ansarada data rooms in private equity transactions he worked on at Squire Patton Boggs (formerly Hammonds) in London.

At Kardos Scanlan in Sydney, Warren uses the product in his work advising some of Australia’s best known companies, private equity firms, insolvency practitioners and the not for profit sector. 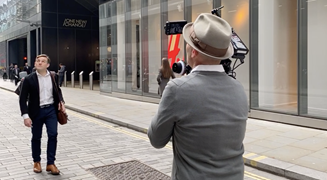