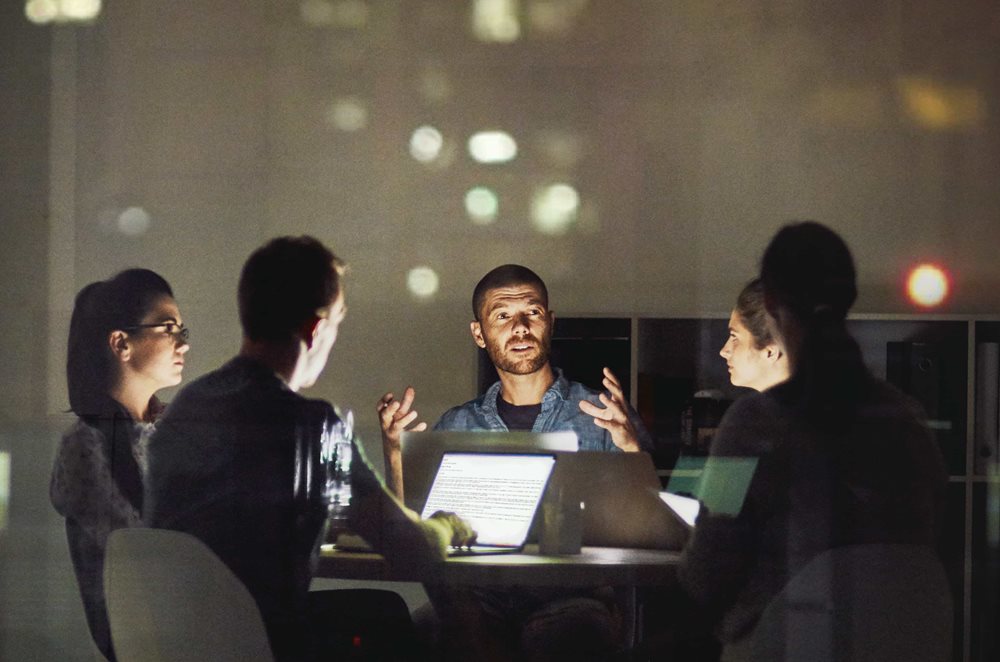 Get your integration in order with our practical post-acquisition checklist

Understand post-deal integration checklists, what’s in them and how to use them

Learn why integrations fail, and how to avoid risks of a failed integration

Please select
What is a post-deal integration checklist?
Creating shareholder value post M&A
What are synergies?
Why do integrations fail?
5 risks of a failed integration
Following integration strategy best practices
Who is doing integration right?
Digitize your PAI/PMI checklist

Bring order to your integration

Download the free post-deal integration checklist to get started. No risk, all reward. 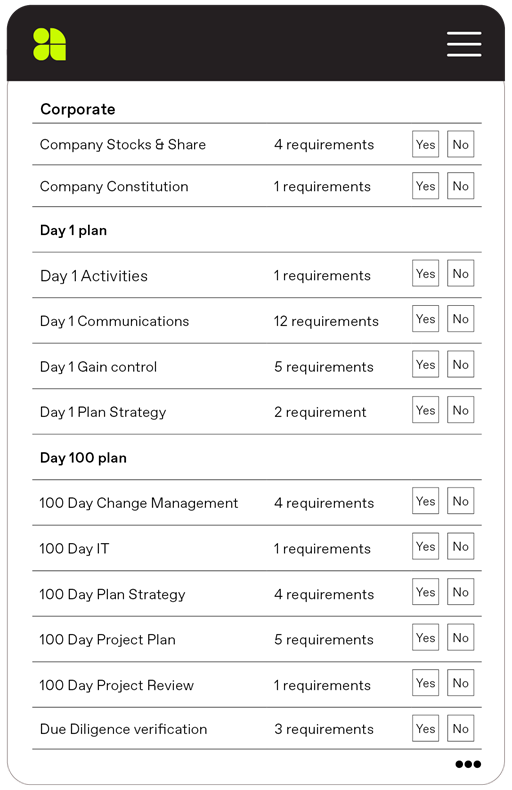 What is a post-deal integration checklist?

A post-deal integration checklist is a list of all the requirements that need to be addressed as part of the integration process between two business entities, following a merger or acquisition (M&A). It is used to help the newly-formed team map out the integration of all the different aspects of the individual businesses and align on objectives and strategy moving forward.

We’ve partnered with Henry McNeill, a leading expert in integration, to develop the post-acquisition and post-merger integration checklist - the first of its kind to clearly  identify and digitize those topics and workstreams to fully integrate a newly acquired entity.

Historically, legacy Data Rooms have failed to support the integration stage of an M&A transaction. However, corporates agree that the vast majority of value realized through M&A is added through the integration process, after the deal is signed. They also agree that this is by far the hardest part of any acquisition. A post-deal integration template they can use and adapt is a major advantage.

Creating shareholder value after the M&A deal is done

Post-deal integration is a critical part of realizing value in an acquisition. However, with the hustle and chaos of due diligence, integration is often improperly planned out before the deal is closed, leading to risk and unrealized opportunities.

To eliminate major risks and realize value in your M&A deal, due diligence must be complemented with an integration plan. A full and complete integration has its own lifecycle alongside the deal, with planning commencing the moment it’s ascertained that the target is likely to pull through the acquisition process.

A solid integration strategy will demonstrate how the synergies being delivered will accelerate business value more quickly than if the businesses had remained separate.

What are synergies and why are they so important?

A synergy increases the value of a merged business over and above the combined value of the original standalone entities. Synergies may arise as a result of:

What causes 60-70% of post-deal integrations to fail?

5 risks of a failed integration

Leading integration expert Henry McNeill says that ‘50% of companies still haven’t been integrated one year after their M&A deal’.

Value from your M&A deal isn’t realized until proper integration is operational. Failure to integrate can lead to the following risks:


1. Loss of information and knowledge

In circumstances where key personnel leave a business following an acquisition, valuable corporate memory may also be lost.

There is an expense involved in running parallel teams with different systems and means of storing, hosting and migrating data.

The above can lend itself to a poorer customer experience, which can contribute to revenue losses and a damaged reputation.

People will already be feeling overwhelmed and threatened about their work and jobs in such a volatile time. Added ‘us vs. them’ culture variations may lead to a struggle to retain talent which was key to the acquisition being undertaken. Employees might not be fully informed about the relationship or confused about the integration between the two companies.

5. Lack of alignment for the new unified entity

Both sides of the M&A deal must align on the business objectives, otherwise each entity is likely to continue to work in frustration separately and synergies remain unachieved.

Without a proper integration, the path forward for the new entity will remain unclear and their future, ominous.

Ultimately, all the above lead to a single overarching risk: failure to realize value in the deal. 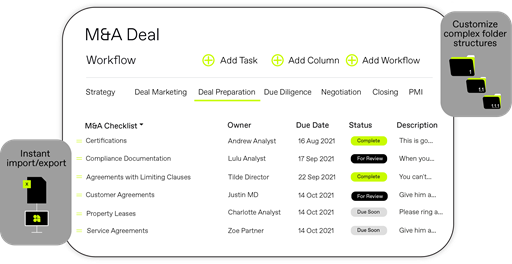 To connect valuable due diligence findings with your integration project, you need to follow a framework and start as early as possible. If you’ve already acquired a business but remain unintegrated or partially integrated, establishing an integration strategy can still be hugely valuable in getting the process back on track.

Having this framework laid out will give you and your team the confidence your required outcome will be achieved with fewer delays, decreased risks and more coherent communication and execution.

Ansarada’s PAI/PMI checklist outlines those topics that will be relevant to executing an integration, from your Day 1 Plan all the way through to your 100 Day Plan. Within the Ansarada Deals platform, it enables a central structured repository for integration delivery, appropriate utilization of knowledge acquired through the transaction diligence exercise, and planning for all buy-side activities.

What I have found is that many businesses start from scratch on the next acquisition, making the best use of their previous experiences, chiefly due to different people being involved and a lack of a long-term reusable repository to store experiences.

Who is doing integration right?

VMWare’s Corporate Development team has been able to reduce their time from LOI to close to 21 days, all by standardizing on Ansarada. They currently run between 6-10 strategic acquisitions every year.

By standardizing and centralizing all processes using the Ansarada Platform, the team is enabled to mitigate risk, drive decision making and to move with speed, clarity and certainty on acquisitions – from day one all the way through to a successful integration.

Using Ansarada’s technology, VMware runs multiple processes simultaneously across a single purpose-built platform, giving them a single source of truth for all data in real-time and allowing them to closely monitor progress across all stages of the deal lifecycle.

“For us, it’s having this ‘hub’ for an M&A transaction where all the data is residing in Ansarada so you can have workflow possibilities, help people manage workflow automation and make sure everything gets done, everything has been reviewed,” said John Mills, Associate General Counsel and Senior Director of M&A and Investments.

Crucially, standardizing has allowed VMWare to create best-practice templates and folder structures that they can re-use in an instant.

“It’s the stuff you don't know about that bites you - those unknown risks - so having a good diligence structure helps you understand if the company is disciplined and how they are organized,” said Mills. “You can tell a lot about a company's culture just about how organized they are coming into the M&A process.”

Shifting from a transactional mindset to an always-on subscription has allowed VMWare to successfully integrate up to 10 new companies in a single year – quickly, and with minimal risk. 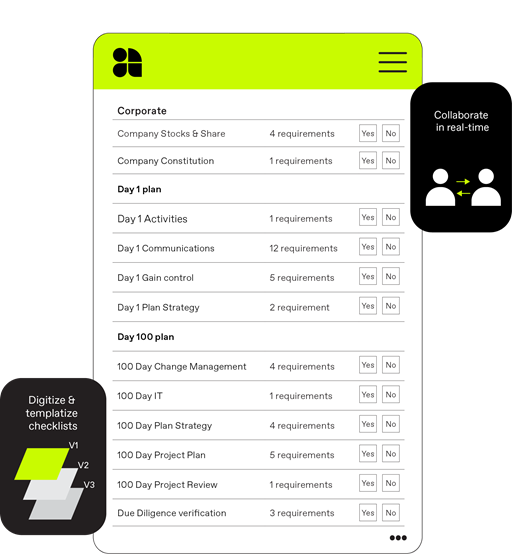 Since 2005, Ansarada has accumulated more than a decade’s experience on over 35,000+ critical business transactions and learned exactly what ‘good’ looks like.

If you are either in the middle of due diligence or have recently finished the process, all the data and insights you need for your post-merger or acquisition integration should have been uncovered (or will be) in the initial due diligence phase.

Access your Workflow space alongside the Data Room and import your post-deal integration checklist Excel file directly into Workflow. The PAI/PMI checklist was created with the knowledge and experience from over 35,000 M&A deals which makes it a strong starting point – but every deal is different, and if you need to customize your Workflow, you can do that easily.

In your Workflow space, your integration checklist gives you real-time visibility into the information you have and the information you need. Start assigning out responsibility for certain areas of the integration and collaborate with your team in a single place. Work from Day 1 to Day 100 with a clear picture of your goals and how you’re tracking at every step of the way.

Start preparing your integration strategy today for free using your purpose-built PAI/PMI checklist. If you are just starting your buy-side M&A process, open up a Data Room for free below and hit the ground running the second the contract is signed.

Get your integration checklist here

If you don’t want to open up your free Data Room just yet, that’s ok too. Simply fill in the form below to download the free post-deal integration checklist template in Excel.