Energy companies will turn to acquisitions to rebalance carbon portfolios

ESG will continue to be the main driver of M&A in the energy sector as organizations seek to acquire capabilities to manage the clean energy transition and stay competitive in the energy market.

By AnsaradaThu Sep 01 2022Mergers and acquisitions, Due diligence and dealmaking, Industry news and trends

The energy sector – like many others – has seen low mergers and acquisitions (M&A) activity in 2021 and the first half of 2022, though Asia Pacific has been one of the most active areas. This is partially due to supply pressures caused by the Russia-Ukraine conflict that has led to increasingly volatile global markets. And it’s partially caused by companies waiting for global demand to stabilize. It’s also the result of companies looking to make fewer, but more sustainable deals.

One area where companies are making these ‘positive impact’ deals is lower-carbon assets.

History of M&A in the energy sector


A decade ago, M&A deals were primarily done to cut costs and build in new efficiencies. This dealmaking was primarily accomplished by international oil companies and other large global players. And the assumptions and strategies around building and maintaining an organizational portfolio were fairly stagnant.

Today, the players have changed, the market has changed and the assumptions about how to address growth challenges have changed. There are many more players in the M&A game – including national oil companies, oil services companies and private equity firms. And they’re being driven by the need to target resources and meet changing market demands.


Data from Ansarada’s Deal Indicators Report shows that new energy M&A deals commencing in the second quarter of 2022 dropped by 14% QoQ globally (and 4% YoY). During the second half of 2021, deals relating to energy transition accounted for 55.6% of all deals taking place in the sector.


Much of the energy sector was in a dealmaking slump – including oil and gas, which, in terms of deal volume, was largely flat coming in at around 1,800 oil and gas details in 2021, and mining which recorded a 14% drop in recorded deals from 2020, a year where all economic activities were highly curtailed. However, 2021 was also an unprecedented year for deals responding to climate change pressures. In fact, 2021 had an incredible $100 billion-plus wave of such deals. With the industry also reeling from surprise exits by C-suite executives under pressure of transition to low-carbon energy, this has meant a fairly volatile 12 months.

The main drivers for these acquisitions and other restructuring is the need for companies to respond to environmental, social and governance (ESG) issues. The most prevalent is clearly environmental.

How will climate criteria impact business deals in the energy sector?


Recent ESG-related deals – such as the $42 billion merger between Woodside and BHP Petroleum and the Santos and Oil Search deal, show that big players are looking for stronger platforms where they can better navigate the transition to low carbon energy.

While ESG has been around for a while, now it’s driving the deal flow. This is evidenced by the volume of deals in 2021 and so far in 2022, and the multiple transactions waiting in the wings. More companies are using M&A activity to green up their existing operations, future-proof their ESG assets, and reshape their business models. In fact, strategic players who can successfully reconfigure their portfolios, reinvent their offerings or find niches of differentiated capabilities, will emerge as leaders in the cleaner energy future.

Australia’s economy has always been heavily reliant on mining – especially coal mining. In 2021, we mined about 400 million tons of it. But, in July 2022 we reached a point where solar briefly took over as the biggest source of electricity in the country. Energy companies that want to remain relevant into the future absolutely must be embracing clean, green energy – and many of them already are.

Mike Cannon-Brookes and mining magnate Andrew Forrest are collaboratively funding a 4,200-kilometer undersea cable to send solar power to Singapore at the cost of A$30 billion. Fortescue Metals Group Ltd, the country’s third largest iron-ore exporter, will take their entire fleet of mining trucks and trains carbon-free by 2040. And even oil leader BP has joined up with green hydrogen firm InterContinental Energy and solar supplier CWP Global to build a 26-gigawatt solar and wind farm on a vast area of Western Australia which would pump out 1.6 million tons of hydrogen, or 9 million tons of ammonia a year.

It is clear that for the rest of 2022 and certainly into the near future, ESG will continue to be the main driver of M&A in the energy sector as organizations fully embrace the need to acquire capabilities to manage the clean energy transition and stay competitive in the energy market.


M&A activities in the mining sector are benefitting from the broader transition to clean energy sources and carbon emissions reductions as well. Companies are looking to refine their portfolios and bring in a supply of minerals and metals, like copper, nickel, lithium and uranium which will help them meet the transition to net-zero.

Of course many companies are already jumping on these opportunities. For example, in March 2022, Metals Acquisition Corp acquired Glencore’s CSA copper mine for $US1.1 billion. And Uranium Energy are nearing final agreement on their nearly $162 million acquisition of UEX. Other deals are in the pipeline, as companies begin to see the need to consolidate their capabilities to meet future requirements.


Ansarada’s FY23 Deal Indicators Report draws on anonymous, aggregated data across active and ongoing M&A deals (and 400,000 data points) on the Ansarada platform. Our mission is to both support M&A activities, and utilize data to provide new leading market M&A insights into all sectors. Our analysis of this data allows us to unveil trends in the deals landscape as they happen - rather than after the fact - and extrapolate the future of dealmaking across the globe. 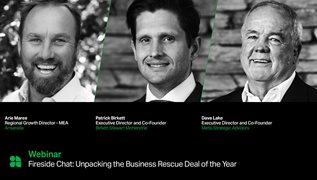 Unpacking the Business Rescue Deal of the Year